June 18 update: While looking online today for a photo of the mural that was the inspiration for this post.came across an article about the lynching of a Black co-op owner and two employees in Memphis in 1889. I was going to put it at the end as an addendum but decided to put it at the beginning. Read it first and THEN (maybe) read my post.

Original post: Last Tuesday morning, June 9, was the second day of the 121st annual convention of the Minnesota Music Teachers Association. It took place live and online. I was running one of the Zoom sessions. The first presenter of the day, during the sound check, before anyone else was in the “room”, asked me regarding the murder of George Floyd by four Minneapolis cops, “What’s your take?” (He was from out of town). My initial — internal — reaction was, “Interesting question… not what I expected to hear.”

What I said out loud was, “Well, if you know Minneapolis, I-35W runs through the south side, and runs north-south. My studio is on 38th Street, a half mile west of the freeway. Half mile east is 38th and Chicago, the scene of the crime.”

38th and Chicago features, of course, Cup Foods, in front of which George Floyd was murdered. They are the ones who called 9-1-1. That is what it is, not assigning blame… but it’s potentially a jumping-off point for a discussion about who we call when only $20 is on the line. The south side of the store now features a world famous mural, painted by a white person, who is now going on social media and admitting if they had to do it over again, they as a white person would not do that without consulting anyone from the community, especially people of color.

Another grocery, the Seward Friendship Store, which is actually a co-op, sits at the former location of the Greater Friendship Church. The “Seward Co-op” as I call it, is a bit closer to my studio, just east of the highway. I go there all the time. It opened in 2015, not without controversy, being that co-ops tend to be patronized mostly by white folks. Right now the co-op’s walls and boarded-up windows are covered with murals. Front and center is a mural with the message, “Performative allyship will not suffice. Demand justice.”

That thought has been on my mind for a few weeks now. I can educate myself on the issues, I can listen more and speak less, I can donate money, I can focus on the intersectionality between climate justice and racial justice. But as a performing and teaching artist, I can also ask myself if my participation in music is relevant and respectful. Don’t know exactly what that looks like yet. For starters, maybe always acknowledge the spiritual source of anything I create? Ask myself, why am I playing this piece? Why am I teaching this piece? I can start there and grow from there.

After a week of teaching lessons online, because “flatten the curve”, I was tired but inspired. This came out of it. Improvisation recorded with a gaming webcam – I think I got the last one in the store before everything like this was sold out.

Hey everyone, I am going to be one of the clinicians at the 2020 Schubert Club Jazz Piano Workshop. Excited to be doing this! It’s open to middle and high school students. No previous jazz experience necessary, but you have to have 3 years of piano lessons.

Fifteen years in, I have a “first” this week:  studio classes.  Rather than get all/most of my piano students together at once for a traditional recital, I broke it up into four groups, rearranged the furniture in my studio, and invited everyone and their family and friends for a slightly cozier and less formal hour of music-making. 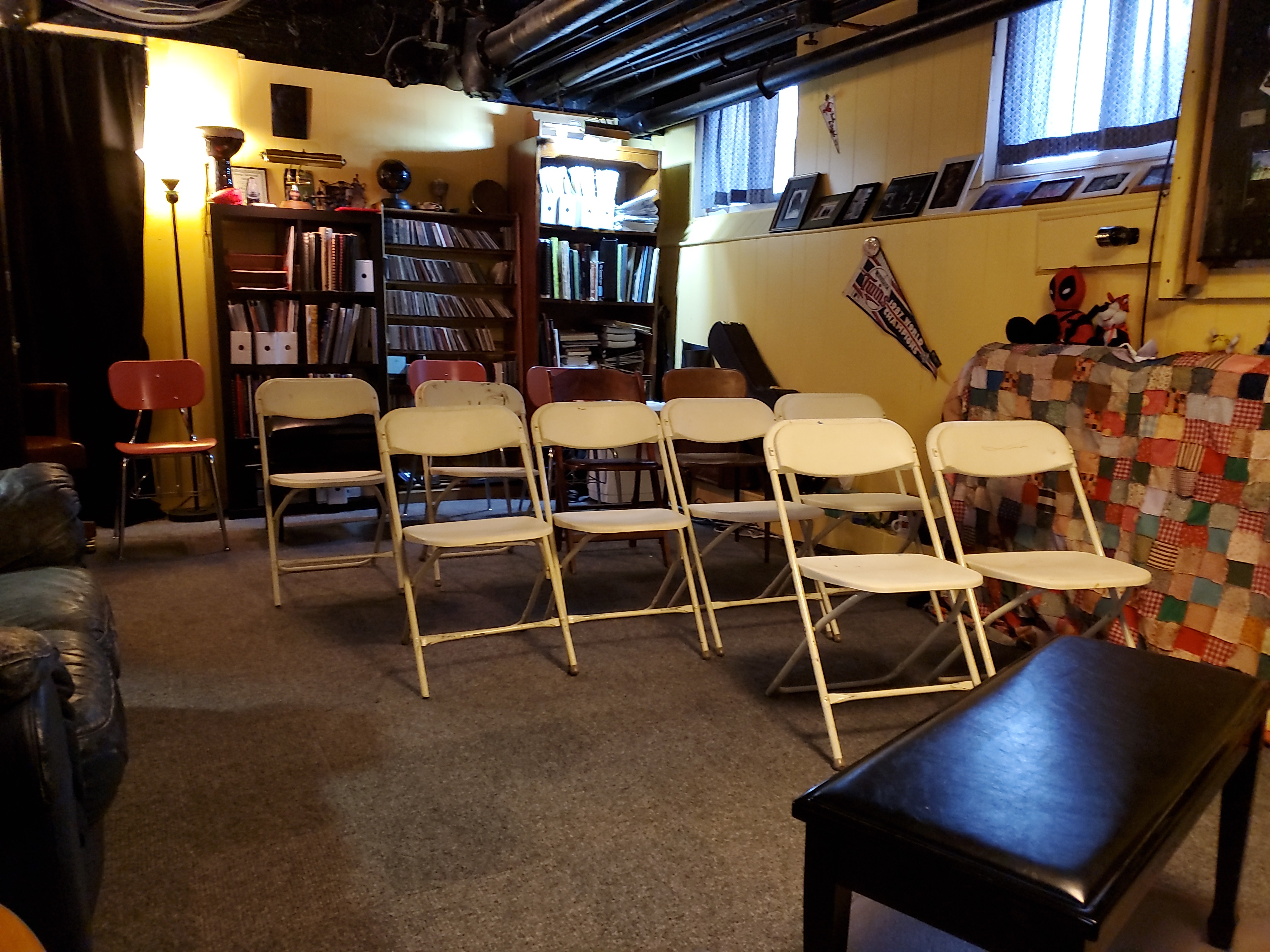 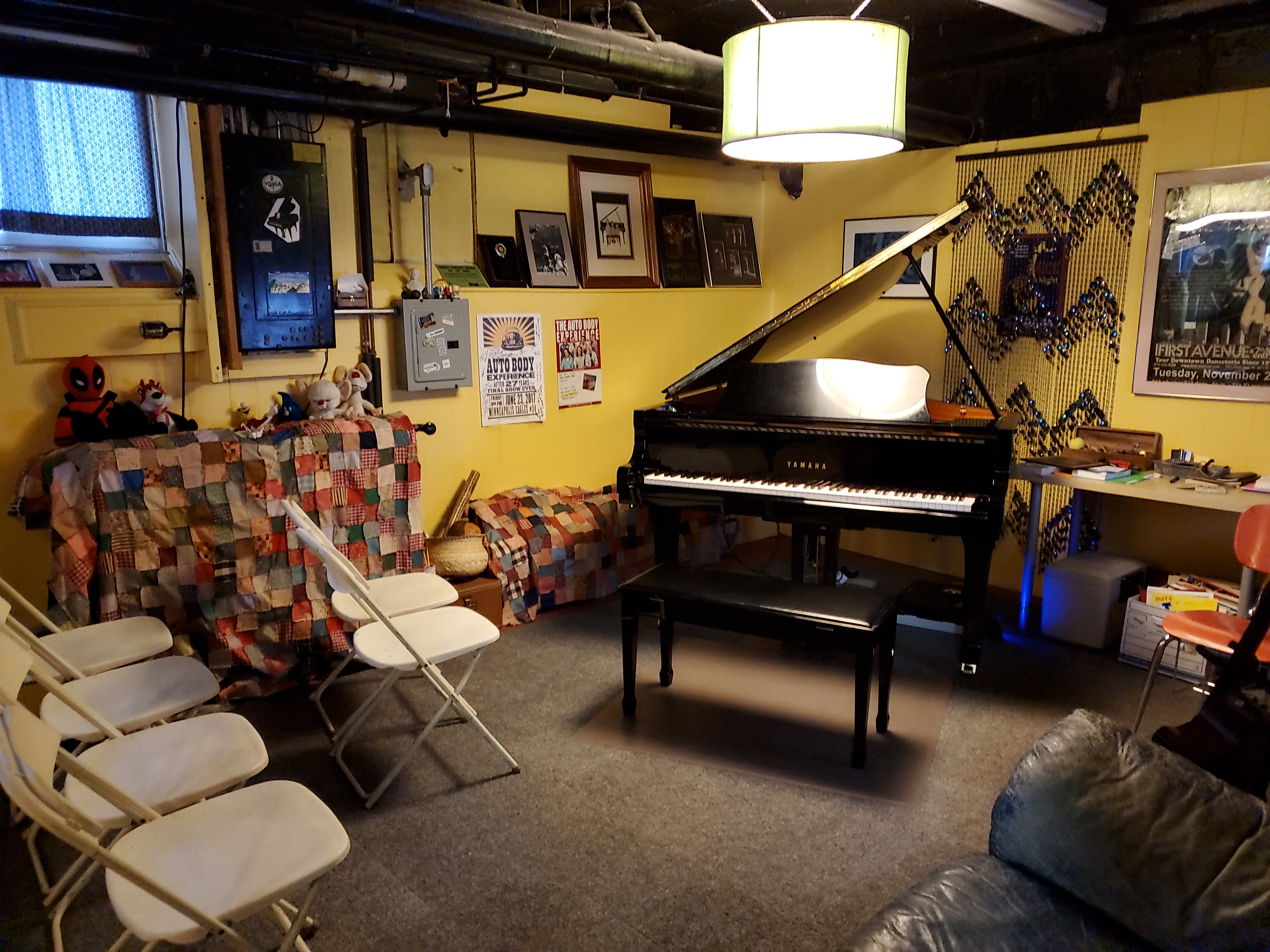 I have a talent for taking pictures of things instead of people.  This is what it looked like right before the first one.  I moved the “nice” lamp so it was right over the piano and turned off the fluorescent light.  I think I might leave it this way!

First class was a success.  Three out of the four students involved both arranging and transposing in their pieces.  This is a keeper!

To steal a phrase from Was (Not Was), I feel better than James Brown.  Several reasons. 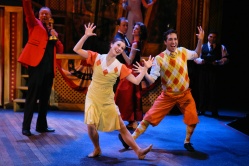 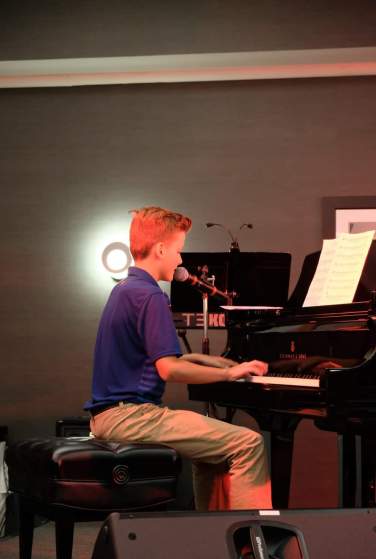 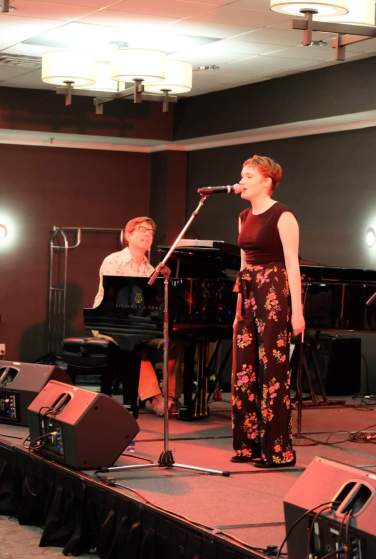 Music directed and arranged “Monday Music Madness II” at the annual convention of the Minnesota Music Teachers Association (MMTA).  This was a student-led cabaret, backed by a professional rhythm section, that began with state-wide auditions submitted by students of MMTA teachers.  Above:  Emmett Mathson sings “Great Balls of Fire” and tears up the keyboard, and Grace Cline sings and scats on “Is You Is or Is You Ain’t My Baby”.  Here are a couple video links:

Collide Theatrical Dance Company is doing a dance-theater production of Dracula at the Ritz this fall, for a two-week run. (Rumor has it the show might be extended a week but I’m not allowed to give dates for that yet : )

WCCO interview with Renee and Rush

We are pretty proud of this show – some of you may have seen it in spring 2016 – MinnPost put us in their “top 5 artistic experiences of the year”. I will be serving as music director, and playing keyboards in the band. This my 3rd season with Collide.

Our lead dancers are veterans of shows like West Side Story and Jesus Christ Superstar at the Ordway. Our singers are Michael Hanna, who works regularly as an actor at the Guthrie but is an outstanding rock singer; and Katie Gearty, a first-call jazz, r&b and rock singer who works regularly with Adam Levy’s band Hooker$ n Blow, Mick Sterling’s many projects, and has her own jazz CDs to her credit. And the band is … well, I’m biased, but it’s a really good group of musicians!

Hope to see you there! If you come, please wait in the lobby afterward so I can say hi and brag to the company about how my friends support us – ha!

Collide Theatrical Dance Company is back at the State Fair for twelve short “pop-up” performances:

Come check it out and say hi!

A shout-out here to my friend and teacher Liz Wolff.

She’s holding a music retreat at St. John’s this August.  I’ll be attending!  From the website:

Music @ 10,000 Lakes is a two-day retreat for professional pianists who wish to practice and perform, new, old, unfinished or polished repertoire for and with their colleagues. Located on the exquisite lakeside campus of St. John’s University in Collegeville, Minnesota, the retreat will additionally afford time and opportunity to meditate, walk the nature trails, read, relax and revitalize.

The retreat will take place Sunday afternoon, August 13 through Wednesday morning August 16, 2017. Practice and performing facilities are on the campus of Saint John’s University. Lodging and meals are available at the St. John’s Abbey Guesthouse.

Looking forward to seeing you in August! In the meantime, enjoy exploring this website and feel free to contact us with any questions.

One more weekend to go but I’ll go out on a limb and call Le Petit Moulin at the Ritz with Collide Theatrical Dance Company a success.  We are getting good houses, good notices, and raves from friends!

What I mean by “cross that one off the bucket list” is the accordion.  Learned it for the show because we needed that French cafe feel . . . and apparently accordion is cool again and all the good players are either working or charging a lot : )

Here I am struggling with it at an early rehearsal.  Let’s just say I’m glad this is just a photo and not a video with sound : )

And here is evidence that I actually used the thing in performance.  I believe this number is my reharmonization of the famous Offenbach “Can-Can”.  For the music geeks in the room, I put the “A” section in a minor key and rewrote the melody for both the A and B sections.  It was fun. 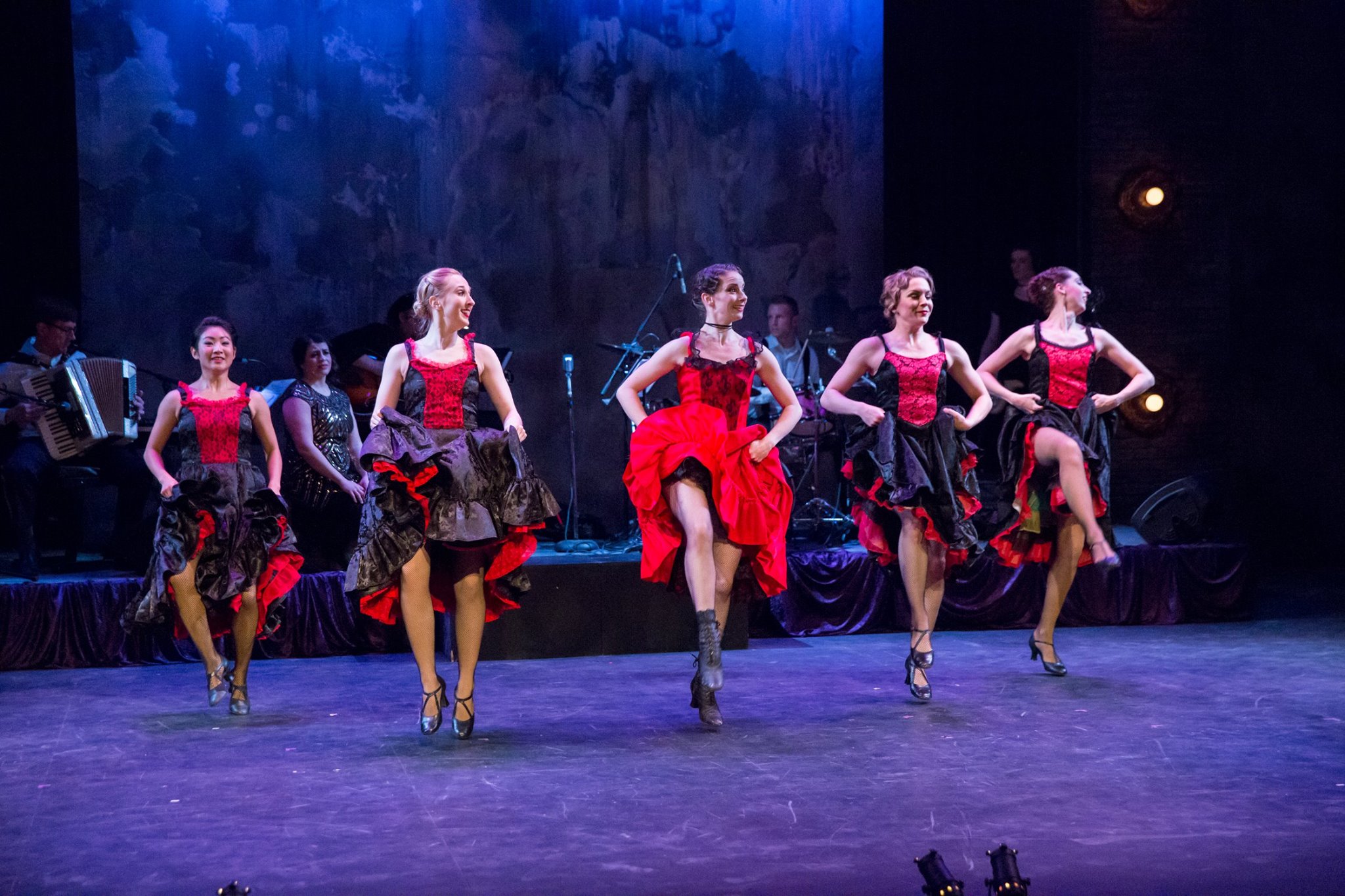 The show’s final number was a mashup of Panic! At the Disco, Fatboy Slim, and The Pointer Sisters.  Don’t even ask.  Or do?  I’d be the first to admit it was fun to put together, if not a little nerve-wracking.

Tickets are still available online or at the door
($34 general, $26 students/seniors, $50 VIP)

Plenty of cool restaurants too in this great Minneapolis neighborhood. Hope to see you there if you haven’t seen it yet!

“Playathon” was this weekend at the Mall of America.  This is a long-standing fundraiser for the MusicLink Foundation, which helps provide instruments, music, and other materials to students  who might not otherwise be able to afford them.  The event goes a whole weekend, at the Mall of America.  The Minnesota Music Teachers Association (MMTA) and Schmitt Music are the sponsors.  Kudos to MMTA member Sue Wege for putting the whole thing together!

For the 3rd year in a row, we had a “Popular Styles Hour” where kids got to play and sing their pieces with a backing band.  That’s James Towns on bass, Beth Varela on drums – with her son Nathan keeping her company – and yours truly on piano and guitar.  We had a blast! 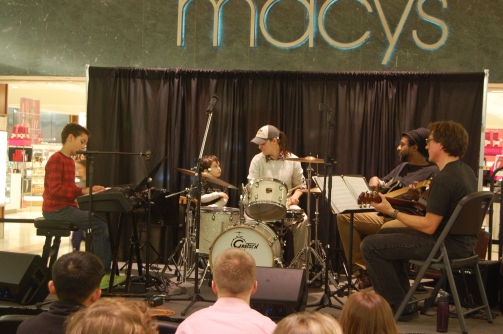 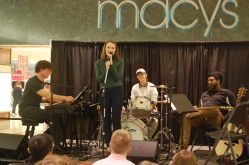